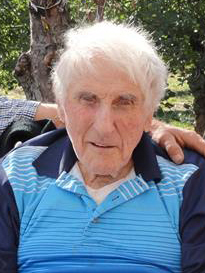 He was born to James Ernest Foster and Sarah Mabel (Fryar) Foster on April 15, 1916 in Morgan Township, the first of their five children. During his childhood, he roamed the wilds of Morgan Township in the Salt Creek area. He enjoyed hunting, trapping, playing basketball, and listening to Cubs baseball on a radio powered by a car battery.  He was a lifelong Cubs fan and a fan of Purdue University's Basketball teams. He played basketball for Morgan Township School, earning the Porter County Mental Attitude award during his senior year.  He graduated with the Morgan class of 1934.

Dallas met the love of his life, Edna Mae Metz, and they were married in Sullivan, In. on December 23, 1940. He grew up farming with horses and mules but farming was his still occupation of choice.  In the 1930's, he worked at US Steel in Gary and he was a dairy farmer in Porter County until 1953.  In that year, he moved to Jasper County and worked for the State and County highway departments.  He began farming again in 1961 for Clark Farms in Wheatfield.  He enjoyed growing things.  Among the more exotic things he grew in northern Jasper County were cotton, peanuts, and a variety of corn with ears three feet long.

Dallas was a self-taught beekeeper and local honey producer who never lost his love of nature. He was often seen feeding the skunks and raccoons from his hands while sitting on the back step of his rural Wheatfield home.

He was a patient, gentle and kind man who will be remembered for his cheerful smile and positive outlook on life.  He was a devout servant of God and a life long member of the Church of Christ, attending in Wheatfield since 1953.

Dallas was preceded in death by his wife of 71 years, Edna Mae; his brothers Lloyd and Kenneth, his sisters Betty Gingerich and Annabel Ailes; and one granddaughter, Bethany Gabriel Foster.

Visitation will be held at Boersma Funeral Home on Wednesday, July 6, 2016, from 4:00 – 8:00 pm.  Funeral services will be at the Wheatfield Church of Christ; High and Center Streets, Wheatfield on Thursday, July 7, 2016 at 10:00 am. with Gerald Frump officiating. Interment will follow at Graceland Cemetery, Valparaiso, Indiana

Memorial gifts may be given to Shults-Lewis Child and Family Services (www.ShultsLewis.org) and to DeMotte Aperion Care Activities Fund (https://aperioncare.com/locations/demotte/).